City officials are hopeful that an agreement with a local real estate broker will help attract business to the 420th Street Industrial Park, which has sat vacant for more than six years. 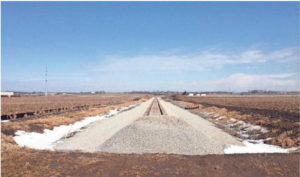 The Iowa City Council on Wednesday will consider entering a one-year listing and marketing agreement with Jeff Edberg, an Iowa City commercial real estate broker with Lepic- Kroeger Realtors, to help find a tenant for the 173-acre parcel along 420th Street on the southeast side of Iowa City. The city purchased the parcel in 2009 from the Bonnie Prybil estate for $2.4 million, and since has invested $12 million towardextending streets, water lines, sewers and electricity to the site.

Maryland-based North American Ductile Iron Co., or Nadicom, announced plans in April 2011 to build an $85 million foundry on the site that was projected to create 175 wellpaying jobs, but those plans never materialized.

Mark Nolte, president of theIowa City Area Development Group — which has partnered with the city to market the site — said the site was initially marketed as the Wind Energy Supply Chain Campus. Over the last six years, Nolte said, the net has been cast wider after indications that Nadicom would not be able to move forward with an Iowa City foundry. “With the changes in the wind energy market and their ability to raise capital, we don’t foresee Nadicom moving forward here,” Nolte said. “The site itself has been a finalist a number of times for multiple projects, but for one reason or another they didn’t pan out. Sometimes the company wasn’t able to get their finances together to move forward, and in several instances we’ve had companies through their consultants really like the site, but when they dug into our labor market realized maybe we didn’t have the labor in enough supply for their clients tomove forward.” Edberg, who is already familiar with the site, said it is designated “shovel ready,” and that all of the high-capacity power and water lines are in position and awaiting industrial development.

The city received a pair of state-issued grants totaling $2.3 million between 2009 and 2010 that were used to reconstruct 420th Street and to construct two sidings and a rail spur off the Iowa Interstate Railroad that now runs through the center of the parcel.

“There’s some unique features to this site, and one is the rail spur. A lot of materials are trucked in on Interstate 80, which is a direct access right to the site and we certainly accommodate that, but a lot of products are also moved by rail,” Edberg said. “Trains can pull off the main rail and let othertrains pass while they go within the industrial park and load and unload raw materials or finished products. It really puts this site on the map.”

Wendy Ford, the city’s economic development coordinator, said between April 2014 and March2015 the city contracted listing and marketing services with Minneapolisbased real estate agency Binswanger. The city issued a request for proposals for broker services earlier this year, Ford said, and received two proposals: one from Binswanger and the other from Edberg.

“(Edberg) has a large network to draw from as a (Certified Commercial Investment Member) and a member of other commercial and industrial real estate industry trade groups, and we’re hoping he taps into that while he’s working on this site,” Ford said. “He has great networking across the community and has helped the city with other real estate deals in the past.”

Documents in the City Council’s packet show that in his proposal, Edberg requested 6 percent commission on the sale of the property and offered to split the commission 50 percent with any real estate brokers who might be involved. Binswanger also had requested a 6 percent commission, but would have required 8 percent if other brokers were involved, according to the documents.

Edberg said he plans todraw on his experience and network as a CCIM and a Society of Industrial and Office Realtors to help the city find a tenant for the vacant parcel.

“Being a member in those organizations opens up a network across the world. If other members have a prospect for the park, they’ll be able toreach out for me. It’s a matter of actually assigning tenants, working with the city of Iowa City and ICAD Group to facilitate bringing these tenants to Iowa City,” Edberg said.

The industrial park along 420th Street on the southeast edge of Iowa City has been certified as “shovel ready.” But as yet, there have been no shovels, and the factories the city envisions attracting have yet to arrive.