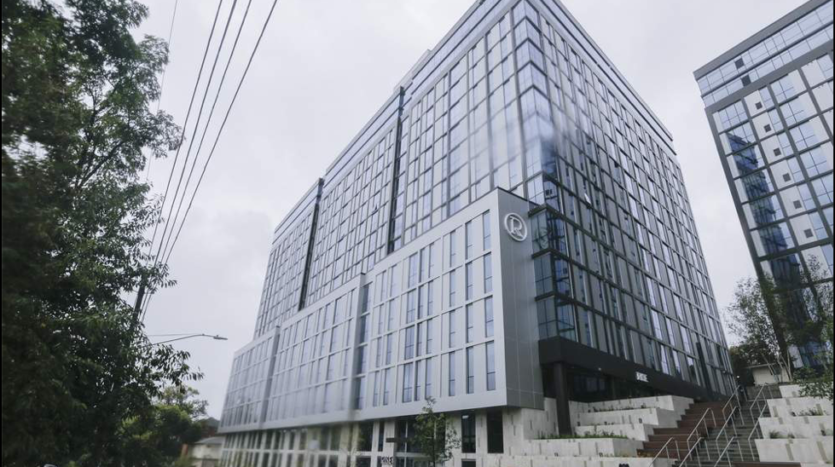 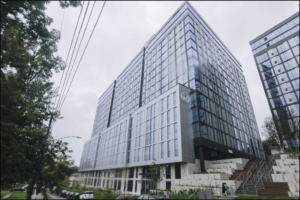 (The 3rdand 4thfloor of the rise are currently offered for lease (or sale) under separate listing by Jeff Edberg, CCIM, SIOR

Last month, tenants moved into Rise at Riverfront Crossings, a 15-story private student-housing development with more than 300 units. Rise is one in a string of high-end student-oriented housing complexes to come online in Iowa City, including The Quarters and a proposed 15-story four-building development at 12 E. Court Street, Iowa City.

“Demand has grown for modern, amenity-rich housing communities that meet the high standards of today’s students and parents who want a safe, functional and enjoyable living environment,” JJ Smith, principal of Rise’s developer CA Ventures, said in an email statement.

The residential building is paired with a 14-story Hyatt Place Hotel, which opened this week.

Rise is opening at a time when Iowa City is experiencing high rent prices and low vacancies, but multiple large multifamily housing projects are underway.

Vacancy rates across Iowa City differ, with the area immediately around downtown Iowa City about 7 percent but the greater Iowa City area below 3 percent, according to a 2017 rental survey from Cook Appraisal. The state’s median gross rent is $715 while Iowa City’s is well above that, at $873, according to the US Census Bureau.

“We believe so much in this market that we’ve started construction on a second student housing development, Latitude at River Landing in Coralville, which will offer rental rates at a more affordable price point and is slated to open well in advance of the fall 2019 school year,” Smith said.

Take a tour of Rise at Riverfront Crossings

Smith would not provide rental rates for apartments at Rise, and the facility’s website says rent varies by unit size.

Rise was built under Iowa City’s new inclusionary zoning ordinance,  which requires all new developments in the Riverfront Crossings district — a neighborhood just south of downtown — to provide 10 percent of its units as affordable or otherwise pay a penalty.

Smith said 10 percent of its units are being rented at affordable-housing rates to those making below 80 percent of the area median income. CA Ventures also gave $1 million to the city’s affordable housing fund, he said.

Rise was built after the city put out a request for proposals to redevelop the land that was previously St. Patrick’s Church at Court and Linn streets. Smith said CA Venture’s project was chosenfor the property in part because of its mix of uses, which includes office space in addition to the hotel and apartments.

Aside from offering fully furnished apartments, the silver LEED-certified facility features numerous amenities. Residents have access to a fitness center, pool, sun deck, study areas and a lounge, complete with an arcade, pool and pingpong tables. LEED stands for Leadership in Energy and Environmental Design, the rating system used by the U.S. Green Building Council to measure a building’s sustainability and resource-efficiency.

The construction of Rise came with some controversy, however. Local labor unions took issue with the contractors not using local laborers, among other concerns.

The North Central States Regional Council of Carpenters called for the public not to patronize Rise.

“Whether through greed or lack of understanding, the Rise at Riverfront Crossings has made a choice to not support our local tradesmen and women. Please ask your family and friends to join us in not patronizing the Rise at riverfront Crossings,” union reps wrote in a flier appealing to the public.

“CA Ventures has invested over $85M in the Iowa City community to bring the best in student housing, along with a brand name hotel and Class A office space to the market,” Smith said.

Reprint from the Gazette by Madison Arnold – September 8, 2018