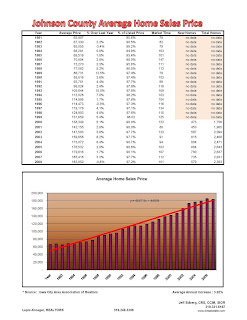 Yes, we are in a recession and boy am I sick of hearing that. Believe me, I know there are real problems with this economy, but the self fulfilling prophecy aspect of talking about it is another problem altogether.

Let’s see what a recession actually means in Iowa City. I have tracked home sales prices in Johnson County since 1981. My method is to track the average home sales price, the marketing time, the change from last year and the list price to sale price ratio. Over time this seems to tell us about the health of the local market.

We can see there is a negative effect going on in the market, but it is thankfully mild. We wish it were this good nationwide, but if we can’t have that, let’s just be thankful we live in Iowa City!