Engineers began to assess possible routes for 2.3 miles of trunk sewer in 2013, and began talking with more than a dozen potentially affected landowners about the project early in the spring of 2014. After assessing the available options, including construction and maintenance costs as well as assessing environmental impact, engineers proposed the current route in May of 2014. The city has continued to work with property owners to fine tune the route, address concerns and establish fair market values for the underground easements.

Alternative routes would cost more to construct, cost more to maintain, and have a greater impact to the environment. A more northerly route for sewer pipe instillation would cost $1 to $1.5 million more, in large part because these alternatives would require the infrastructure to be 50 to 60 feet underground, as opposed to only 10 to 20 feet. The deeper depth would increase the disturbance to the environment by requiring a wide swath of land for the instillation trench. The additional depth would also increase long-term maintenance cost.

Project design included conducting environmental impact studies. The city is continuing to work the Army Corp of Engineers and the Iowa Department of Natural Resources, which will ultimately need to issue a permit for construction to commence.

highway-965-scales-bend-road-finalProject description: A four-stage reconstruction of Highway 965 from the Penn Street intersection to Pheasant Lane to remove the highway’s bank, add turn lanes and traffic signals at Scales Bend Road (seen to the right), improvements to the intersection with Dubuque Street, the addition of trails and sidewalks, as well as landscaping and street light improvements. The first two stages are shown above; stages 3 and 4 are scheduled for 2015.

Start date: Stage 1 was completed in the fall of 2014, as was some of Stage 2. The balance of Stage 2, including the reconstruction of the intersections of Scales Bend Road and Dubuque Street, is scheduled for the spring of 2015, with the final two stages are scheduled for 2015.

Detour and access: Stage 2 work will close the Dubuque Street and Scales Bend Road intersections. Pheasant Lane and 230th Street will serve as the detour route.

The City of Coralville has started reconstruction of Highway 965/Coral Ridge Avenue from Oakdale Boulevard to Holiday Road; details are available at www.coralville.org/coralridgeave.

Project description: The replacement of the old, inadequate water main serving the homes on Hickory Street, an upgrade to the storm water sewer on the street’s southern end, and a new asphalt surface.

Service to homes may be disrupted temporarily during construction. Additionally, driveway aprons may have to be removed and then replaced. The right-of-way along Hickory Steet will likely be dug up and then replaced and reseeded before the project is completed.

Start date: The project, part of three water main projects, is expected to go out for bid in April, with the project starting in late April or early May. 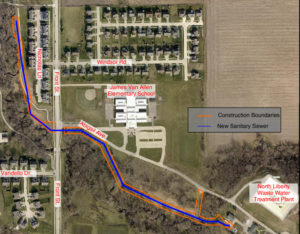 Project description: A new sanitary sewer will be installed from the North Liberty waste water treatment plant to Creekside Commons Park west of Front Street. The project will install about 3,000 feet of new 30-inch and 36-inch pipe parallel to the existing line and will help meet the projected needs for the city’s sewer system. The construction area will be limited to city-owned property and utility easements, and will use a trenchless method to cross Front Street. Planned work will not close traffic lanes along Front Street or Abigail Avenue near Van Allen Elementary.

Start date: Work is planned for late February or March 2015, with an expected completion in July 2015.