Posted by Jeff Edberg on April 7, 2011
| Uncategorized
| 0
The Iowa City Southeast District Plan
The new, hot topic in Iowa City planning is the Southeast Area Plan. City planners drafted a proposed plan based on public input provided through a series of community workshops and discussion forums with residents, business owners, and other interested members of the community. Areas discussed in the plan are Housing and Neighborhood Quality; Eastside Growth Area; Commercial Development; Industrial and Employment Areas; Streets and Transportation; and Parks, Trails and Open Space. 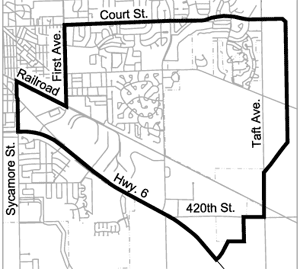 Some of the significant goals and objectives for the Southeast District include:
• Preserving and enhancing the quality of life as identified by Southeast District residents, including easy access to neighborhood schools, parks and commercial areas; diverse and affordable housing options; and public safety;
• Creating a redevelopment strategy for the Towncrest Commercial Area, including a vision for mixing commercial and residential uses, improved traffic circulation, enhanced streetscapes, and public gathering space;

• Plan for a major park along Snyder Creek to separate and buffer any future residential neighborhoods south of American Legion Road from an expanded industrial zone along the Iowa Interstate Railroad.

• Expanding the off-street trail system to link neighborhoods in far east Iowa City to parks, schools, and commercial areas to the west and south.

Where is the Southeast District?

The Southeast District is generally bounded by Court Street on the North, Highway 6 on the south, and extends from 1st Avenue and the Sycamore Mall area on the west to the City’s growth area boundary located just east of Taft Avenue.

The Southeast District contains a number of residential neighborhoods with a mix of housing types, including single family homes, townhomes, condominiums, apartments, and elderly housing.

Ralston Creek is a central feature of the residential neighborhood located between Court Street and Muscatine Avenue. The new Court Hill Trail follows the creek, providing an east-west bicycle and pedestrian connection between residential areas and neighborhood destinations, such as Creekside Park, the 1st Avenue Hy-Vee and Towncrest commercial area, Court Hill Park, and Scott Park.

Located south of Muscatine Avenue, Village Green is a unique residential neighborhood with looping streets and homes clustered around small neighborhood greens or ponds. On the eastern edge of the district the Windsor Ridge and Windsor West neighborhoods extend between Court Street and American Legion Road. There are several residential areas east of Scott Boulevard that are outside the city limits, but within the City’s Southeast Planning District, including homes along Fairway Lane and the Modern Manor and Sunrise Village manufactured home parks.

What is a District Plan?

Since the adoption of the Comprehensive Plan in 1997, the City has embarked on a series of district planning efforts in order to provide vision and guidance for development that is more closely tailored to specific areas of the city. The city is divided into ten planning districts as shown on the map below (insert Planning Districts Map).

District plans are intended to promote patterns of land use, urban design, infrastructure and services that encourage and contribute to the livability of Iowa City and its neighborhoods. District plans are advisory documents for directing and managing change over time. They serve as guides to decision-making, public deliberation, and public and private investments. City planners, the Planning and Zoning Commission, and the City Council will review subdivision, rezoning, and special exception requests using the plan as a guide.

The City will refer to the plan when setting funding priorities for public projects and services. Neighborhood and community organizations can use the plan as a means of fostering support for community-building initiatives, public improvements, and preservation of what is unique and special in southeast Iowa City. Property owners and developers who are thinking of investing in the Southeast District may find the plan useful as a framework for their development plans. The plan will also serve as a benchmark over time. Continuous input from the public will ensure that the plan works equitably and reliably.
(Portions reprinted with permission from City of Iowa City)