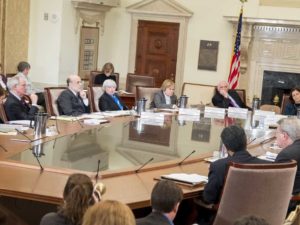 Staff economists at the Federal Reserve expect a quarter-point U.S. interest rate increase this year, according to forecasts the Fed mistakenly published on its website in a gaffe that drew criticism about its ability to keep secrets.

The rate forecast was included with a series of bearish projections on U.S. economic growth and inflation that were presented to policymakers at their June 16-17 meeting.

The disclosure of the sensitive information is the latest blow to the Fed’s reputation for secrecy around policy deliberations.

Later on Friday evening, the Fed said the inadvertently released document was not the correct document. It provided a new table showing slightly lower outlooks for gross domestic product and inflation in 2015, as well as other revisions.

Federal prosecutors are currently probing an alleged leak at the Fed of market-sensitive information to a private financial newsletter in 2012.

“It regrettably appears once again that proper internal controls are not in place to safeguard confidential Federal Reserve information,” said Representative Jeb Hensarling of Texas, a Republican who chairs the House Financial Services Committee and is pressing Fed Chair Janet Yellen for documents regarding the 2012 leak.

The Fed said in a statement that the forecasts were “inadvertently” included in a computer file posted to its website on June 29.

Fed officials said the disclosure was due to procedural errors at a staff level and that the mistake was discovered on Tuesday this week. The matter has been referred to the Fed’s inspector general.

The forecasts do not represent the views of the central bankers who set interest rate policy. Those policymakers, many based outside of Washington in regional Fed branches, create their own forecasts, the most recent of which were released on June 17.

But Board of Governors’ staff views are sensitive and influential enough that the Fed normally releases them about five years after they were made.

In the projections prepared in June, and in the revised table released on Friday, the staff expected policymakers would raise their benchmark interest rate, known as the Fed funds rate, enough for it to average 0.35 percent in the fourth quarter of 2015.

That implies one quarter-point hike this year, as the Fed funds rate is currently hovering around 0.13 percent. USONFFE=

Analysts at JPMorgan and Barclays said this suggested the staff expected a rate hike before a scheduled Dec. 15-16 policy meeting. The Fed also has policy meetings scheduled for July 28-29, Sept. 16-17, and Oct. 27-28.

All but two of the Fed’s 17 policymakers said last month they think rates should rise in 2015. They were divided between whether it would be best to raise rates once or twice this year.

The staff views were less optimistic about the economy than several key policymaker forecasts.

In the revised projections, which stretched from 2015 to 2020, the staff did not expect inflation to ever reach the Fed’s 2.0 percent target. By the fourth quarter of 2020, they saw the PCE (personal consumption expenditure) inflation index rising 1.97 percent from a year earlier.

The Fed’s staff also took a dimmer view of long-run economic growth, expecting gross domestic product to expand 1.73 percent in the year through the fourth quarter of 2020. The views of Fed policymakers for long-term growth range from 1.8 percent to 2.5 percent.

The Fed goes to great lengths to manage the release of sensitive information. Policymakers and staff avoid making public comments just ahead of policy meetings, and the Fed makes journalists turn in their phones before letting them into a locked room to see a policy statement and prepare news stories just before the interest rate decision is published electronically.

A Department of Justice probe is looking into an analyst note in 2012 that included details on a policy meeting before that information was made public.

“It is baffling that these leaks continue to occur,” said Congressman Randy Neugebauer, a Texas Republican who chairs the House subcommittee on financial institutions and consumer credit.